All Those Pretty Birds 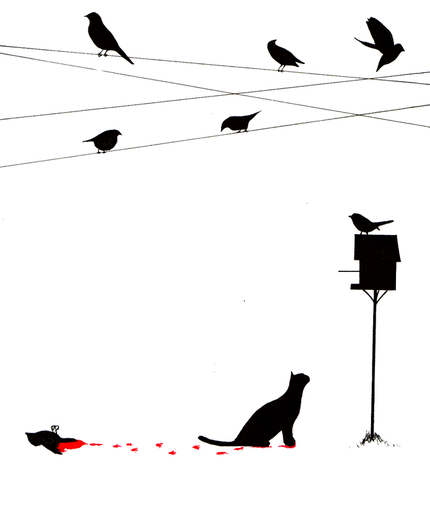 It wasn't fair. When you got here, you noticed that the garden verged onto a woods. It wasn't a big woods or particularly well-tended, but right off the bat you saw the birds, little and twittery, coming out of it to eat from the garden birdfeeder every day. It was lovely.

Almost made it worth it, living here, having to listen to their rules and do things their way. Seeing the birds through a window took all the wretchedness of this place away. You could forget where you were, as you stood there, watching the birds, seeing the sun on their feathers, hearing their tweets and chirps, leaving you able to make it one more day. One more week. All you had to do was look out towards the woods and there they were. More beautiful than you thought possible in this place.

Then the cat came. Why did they get a cat? Why did they let it roam in and out of the place to do as it liked? It didn't matter why, though, it was their rules and that was that. The cat arrived. That cat got the birds, all those pretty birds, killing them off one by one by one as they flew out of the woods and landed by the bird feeder.

That was when they stopped putting seed into the feeder, but the birds had gotten into a habit, somehow, and still stopped by as they left the trees. To check? To hope? For whatever reason, they came and the cat . . . well, it got them.

They tried to keep it from you, but you saw. Today there were three more little birds torn to pieces at the base of the feeder, bloody feathers glowing scarlet in the grass.

It had to end.  It wasn't fair. The birdfeeder was inviting the birds to come and the birds weren't able to understand that it was empty now,  it was a lie now.  No, it had become the private slaughter house of the cat. They brought the cat here. It was their fault. You had to protect all those pretty birds. You knew how to get rid of problems. That was what landed you here, in this home for troubled girls. This time, though, you knew where to hide the mess.

Nobody went into those woods.